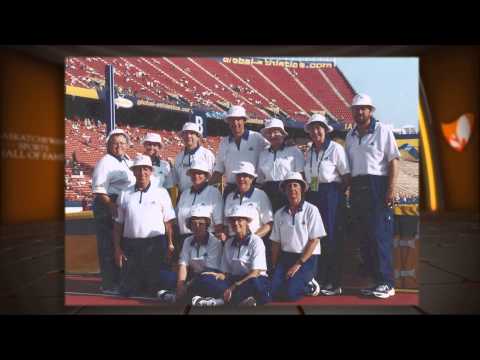 Evelyn (Gorin) Nesdole participated in many different sports during her student years.  At Mount Royal High School in Saskatoon, she was part of the 1964 Provincial Champion volleyball team.  At the University of Saskatchewan, she was a member of the Huskies Women’s Track and Field team for five years—including 1970, when the team won the CIAU national championship.

After graduating from the U of S, Nesdole began coaching throws for the Holy Cross High School Track and Field team—a job she would continue for nine years.  She also began officiating at local track meets and by 1975, she was officiating at the Western Canada Games.  The following year, she was an assistant chief judge of vertical throws at the Olympic Games in Montreal.

From 1984 to 1994, and again from 2000 to 2005, Nesdole was the chair of the Saskatchewan Athletics Officials Committee.  Under her leadership, the committee’s education, upgrading and recruitment programs were recognized as national leaders.  From 1994 to 2000, she served on the Athletics Canada Officials Committee, overseeing the standards for educating National Graded Officials that are still in use today.  All the while, Nesdole continued mentoring and training officials at clinics throughout Saskatchewan.  Her longevity was honored in 2009 when she received the Bob Adams Foundation 45-year Officiating Service Award.