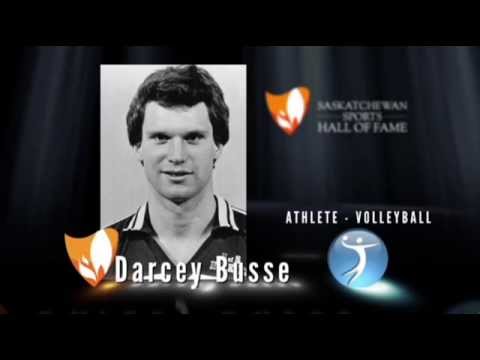 Darcey Busse was raised in Moose Jaw and proved himself to be a natural athlete who competed in many different organized sports as a youth. It was as a volleyball player, though, that Busse distinguished himself as a dominant player and leader.

From 1979 to 1986, Busse played five seasons of collegiate volleyball with the University of Saskatchewan Huskies. In each season, he was named a Canada West first-team all star. Three times, he was named to the All-Canadian first team. Twice, in 1984 and 1986, he was named Canada West and Canadian Interuniversity Athletic Union player of the year. As of 2012, he remains the only male athlete in volleyball to have won CIAU National Player of the Year honours twice.

During his time with the team, the Huskies won three Canada West titles. At three national championships, they won silver twice and bronze once. Busse capped his time at the U of S by winning the E. Kent Phillips trophy as the school’s Male Athlete of the Year in 1986.

Busse’s dominance in the sport naturally led him to play with Canada’s national volleyball teams. He competed as a member of the Canadian Men’s Junior (from 1978 to 1980) and Senior (from 1982 to 83) national volleyball teams at several international events. In 1983, he played on Team Canada at the Universiade (World University Games), in which the team won a silver medal.

Following his graduation from university, Busse became a high school teacher in the town of Outlook. While there, he began coaching and mentoring the next generation of Saskatchewan athletes. In 2000, he spearheaded the formation of a high school football team—the first in the town’s history. His many hours of coaching were rewarded just three years later, when the team finished with a perfect 6-0 record to win its first provincial championship. Darcey was actively involved in coaching until his death in 2008.