Posted by Matthew Gourlie on September 5, 2021

The Saskatchewan Sports Hall of Fame recently digitized colour footage of the first Labour Day Classic between the Regina Roughriders and the Winnipeg Blue Bombers on September 5, 1949. 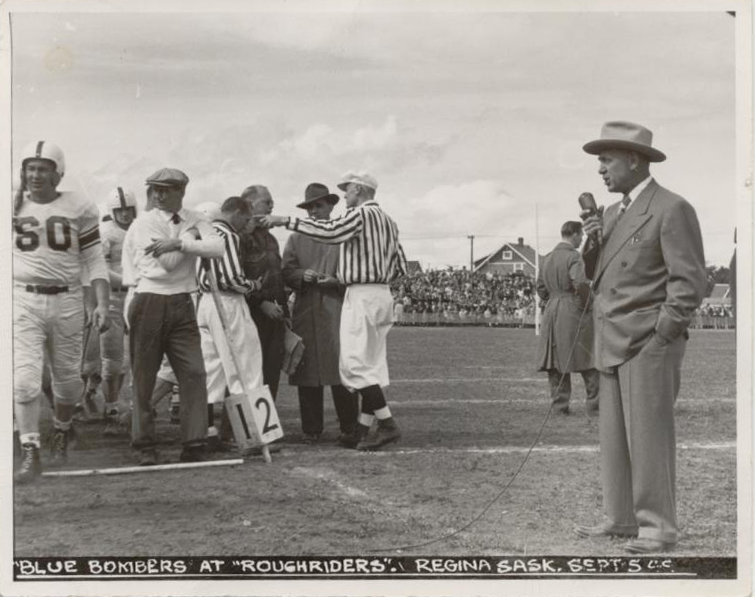 While the game footage is incomplete, we wanted to share a few clips to get a taste of what Labour Day was like 72 years ago when the Roughriders’ played their home opener on the holiday Monday to a record-breaking gathering of 7,500 at Taylor Field.

The Roughriders opened the season with a 13-8 loss in Winnipeg the week before but would prevail 20-0 over their Manitoba rivals in this first Labour Day clash between the two teams.

The Riders (or the ‘Ruffs’ as the Regina Leader-Post called them at the time) would post a 9-5 record in Western Interprovincial Football Union play. They lost the first game of the two-legged final 18-12 to Calgary at Taylor Field. The Riders would win the second game on Remembrance Day in Calgary 9-4, but the Stampeders would advance to the Grey Cup with a cumulative one-point win.

In this clip, Sammy Pierce for the Roughriders (who are wearing white at home and were in their second season wearing green and white) breaks off a 12-yard run and a cloud of dust to get the Riders deep into Winnipeg territory. Pierce was a halfback from Vernon, Texas who went to Baylor. He led the Riders in 1949 with nine touchdowns in his rookie season. He would spend two years with the green and white.

Pierce’s backfield mates are No. 55 Del Wardlien and No. 88 Ken Charlton. Despite their unusual numbers, the two halfbacks would enjoy long careers with the Riders. Wardlien, who was from Great Falls, Montana, spent seven years in Regina from 1948-54. He had eight touchdowns in 1949.

Charlton was inducted into the Saskatchewan Sports Hall of Fame in 1986 and the Canadian Football Hall of Fame in 1992. The Regina-born back attended Central Collegiate, and also played for the Regina West-Ends and the Regina Dales junior team. He played with the Riders in 1941 being named an all-star in his rookie season. Charlton joined the Royal Canadian Air Force and was stationed in Winnipeg so he joined the Winnipeg Blue Bombers in their quest for the Grey Cup. He returned to the Riders in 1943 before spending two seasons in Ottawa prior to returning to Saskatchewan for good.

In this second clip, Charlton crashed through the middle for a three-yard run. He isn’t the only SSHF member in the game. SSHF inductee Paul Dojack is also one of the four officials in the game and is listed as the judge-of-play.

The final clip features Roughriders quarterback Doug Belden stepping out of bounds — but continuing to run — before being hammered by a Blue Bomber into touch. Belden was with the Roughriders for two seasons – 1949 and 1952 – and played many collegiate sports at school with the Florida Gators and is in the University of Florida Athletic Hall of Fame as a ‘Gator Great’.

In this clip, the grey house on Ninth Avenue in the north end zone (which became the Youth Unlimited building) is visible looking nearly the same as it would for the next 65-plus years of Riders’ football.

In this footage, the Riders are running the T formation offence, one of the great early offences that features three running backs in a line behind the quarterback. Invented by Walter Camp in 1882 the T Formation had started to go out of vogue by 1949 as more teams looked to throw the ball more often. The Riders had opted for a more “modern” approach in Winnipeg but went back the T formation to great effect. George Hallas and the Chicago Bears used it to power to a 73-0 win in the 1940 NFL Championship Game and it is so associated with Bears football that it is referenced in their fight song. The University of Oklahoma won three straight American college football championships by using the T formation in the 1950s.

This footage is part of a series of reels of 16-mm film that was recently digitized by Bird Films in Regina. We would like to thank the Government of Canada’s COVID-19 Emergency Support Fund for Heritage Organizations and Bird Films in Regina for their cooperation and support to allow us to make this footage more accessible.