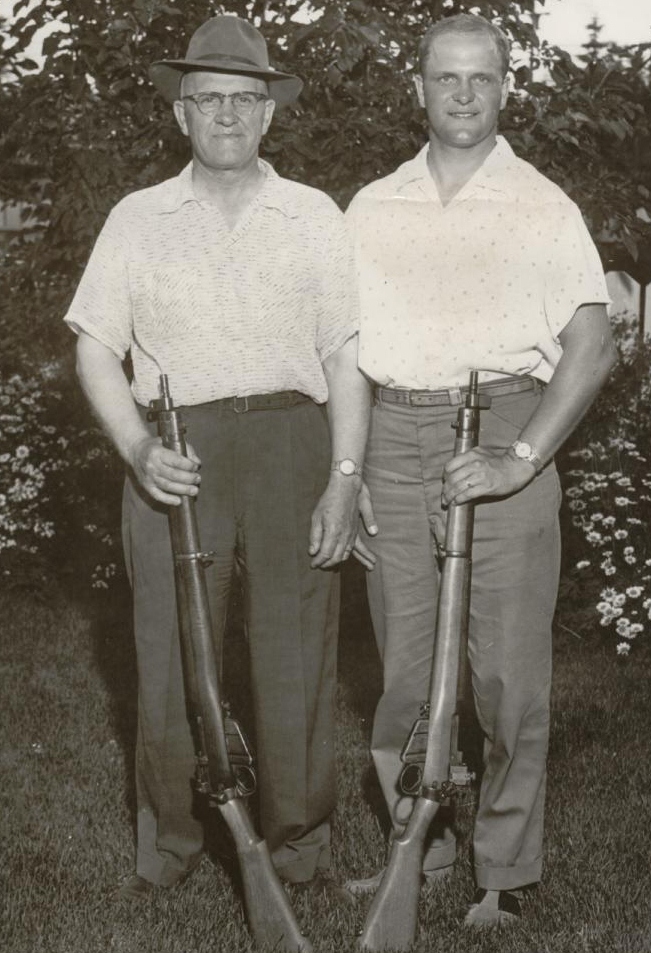 Ed George is an internationally renowned target rifle shooter, coach and disciple of shooting and sportsmanship. He was responsible for encouraging many new shooters into the sport. One such shooter was his son, Ron, who competed against him and shot with him as a father and son team.

In the period from 1951 to 1971, the George’s dominated the rifle shooting sport in Saskatchewan, winning the Provincial Championships on many occasions. Both George’s have a St. George’s Cross for shooting in the top 25 in the British Commonwealth Games. Together they have won over 200 first prizes including 15 Provincial Championships and 15 Governor General’s Silver Medals. They were both members of the first Canadian team to win all the coveted international team prizes at the 1969 Bisley matches, where shooters from the Commonwealth countries compete as teams and individuals. They have represented Canada on 18 national teams, and Saskatchewan on 20 provincial teams in the years that they both lived in the province.

Ed has represented Canada on four other teams to Bisley and he qualified to go twice more. In 1958 he dominated the Canadian championships by winning Bisley; Grand, Wednesday, and Thursday Aggregates, and the City of Ottawa Match. Ron has a Queen’s Gold Badge for placing 10th in the coveted Queen’s Prize, the top shooting events at the British Commonwealth Games. Ed is an Honorary Life Member of the Saskatchewan and Manitoba Provincial Rifle Associations, and Fish and Game Associations. He was secretary of the Saskatchewan Provincial Rifle Association from 1957 to 1964, and Ron was President from 1964 to 1971. They both have served on numerous local shooting club executives in Regina and Saskatoon.

Installed in the Saskatchewan Sports Hall of Fame on March 24, 1979.