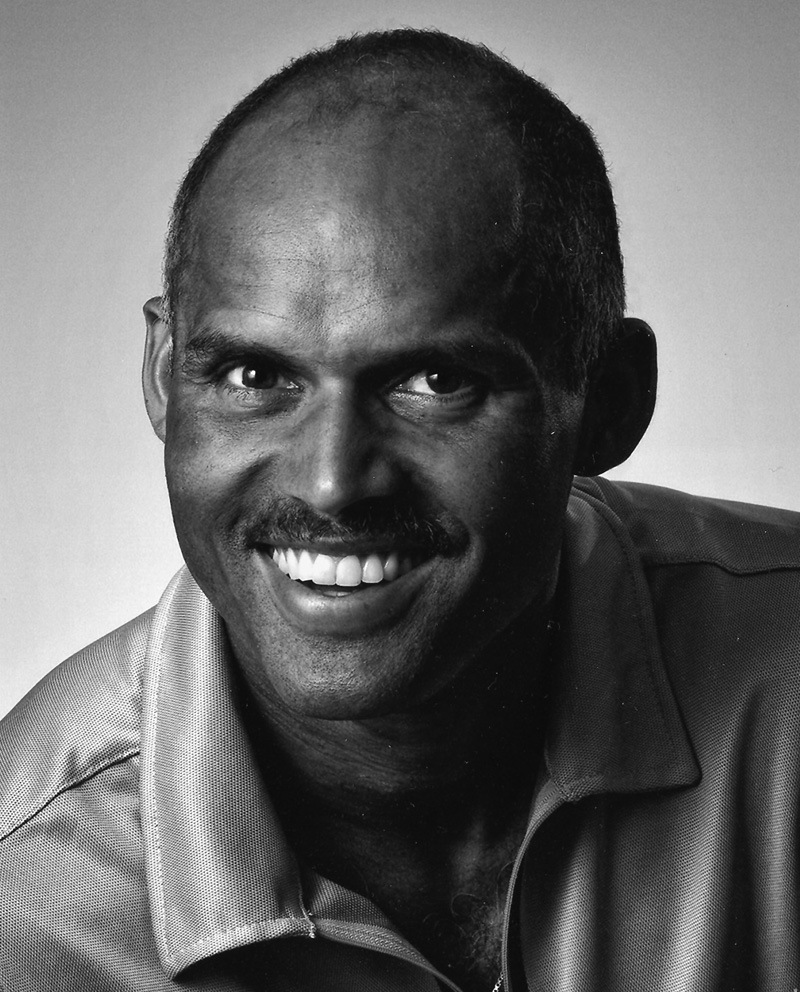 Born in Copenhagen, Denmark, Cyprian Enweani is one of Saskatchewan’s premiere sprinters. Only twelve years after hearing Olympic pentathlete Diane Jones-Konihowski speak about the 1976 Summer Olympics, Cyprian was an inspired Canada West record holder competing for Canada in his very own Olympic Games.
Cyprian moved to Saskatoon in 1976 at the age of twelve and started track at Caswell School under Dennis Beerling. He joined the Saskatoon Track Club in 1977 and immediately set three bantam records at the Knights of Columbus Games in the 200 metre, 400 metre, and long jump categories. In 1981, at seventeen years of age Enweani was a member of the Saskatchewan Games team, and was a senior boys 200 metre provincial champion. He expanded his success in 1982, becoming provincial senior boys 200 and 400 metre sprint and 4 x 100 metre relay champion. To this day, Cyprian still holds the senior boys provincial 200 metre record.
Cyprian soon became a national force in the 200 metre sprint, winning the Canadian Indoor Nationals in 1984, 1985, and 1987; the Canadian Outdoor Nationals in 1988 and 1989; and the Canadian Fours in 1998, 2000, and 2001.
At the international level, Enweani was a 200 metre semi-finalist at the 1987 World Indoor Championships. One of his most distinguished athletic accomplishments was competing as a member of the Canadian Olympic Team at the 1988 Summer Olympics in Seoul, Korea, where he finished ninth in the 200 metre sprint and seventh in the 4 x 100 metres relay. In 1990, Cyprian competed in the Commonwealth Games where he finished sixth in the 200 metre sprint.
In 1988 and 1989, Cyprian received a host of meritorious awards. He was named Athletes Canada and Saskatchewan Athlete of the Year; was a flag bearer at the World University Games in Germany; lit the torch at the Canada Games in Saskatoon; received the University of Saskatchewan President’s Medal for achievement in sports and academic excellence; and was inducted into the Saskatoon Sports Hall of Fame.
In 1992, Cyprian sustained a serious injury which prevented him from competing in competition again until 1996. Cyprian retired from competition in 2004, at the age of 40, after winning the Masters Championship in Calgary and setting provincial records in the 100 and 200 metre sprints. Enweani continues to give back to the community as a coach, an advocate for a healthy lifestyle and against drugs in sport, a team physician and a motivational speaker.