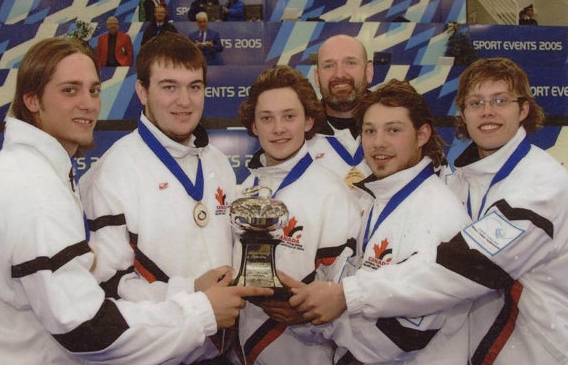 Curling out of Regina, the 2005 Kyle George Curling Team, consisting of skip Kyle George, third Justin Mihalicz, second David Kidby, lead Chris Hebert, alternative Dustin Kidby, and coach Dwayne Mihalicz, became one of the only thirteen Saskatchewan rinks to win the Canadian Junior Men’s Championship. This competition would prove only a stepping stone on the way to the World Junior Men’s Curling Championships.

The first step on the road to the World Curling Championship was qualifying out of Region 7 to compete in the Junior Men’s Southern Playdowns, a twelve team triple knockout event held in Shaunavon. The team won the competition and qualified to go to the 2005 Target Junior Men’s Provincial Curling Championship held in Whitewood in January. The George team won the B and C events of the twelve team triple knock out and defeated the A winners, the Brent Goeres Team to become the 2005 Target Provincial Junior Men’s Champions.

Moving to national competition, the George Team competed at the 2005 Karcher Junior Men’s National Curling Championship held in Fredericton, New Brunswick in February. The George Team finished in first place in the twelve team round robin with a record ten wins and two losses, earning a bye to the final. The rink faced the Mark Bice Team of Ontario in the championship final, and defeated them 8-5 to become Canadian champions.

In March, the rink was off to Pinerolo, Italy to compete for the 2005 World Junior Men’s Curling Championship. The George team finished the ten team round robin in fourth place with a 6-3 win-loss record. In the semi-final against Scotland, the team won 10-2 in eight ends. In the final against the Nils Carlsen Team from Sweden, the George Rink won 6-5 after an extra end, earning the gold medal and cementing their place in Saskatchewan curling history.

For their accomplishments, the rink was named 2005 Sask Sport Inc. Team of the Year; named to the Saskatchewan Curling Associations Legends of Curling Honour Roll in 2005; and inducted into the Regina Sports Hall of Fame in 2006.

Installed in the Saskatchewan Sports Hall of Fame and Museum on June 19, 2010.