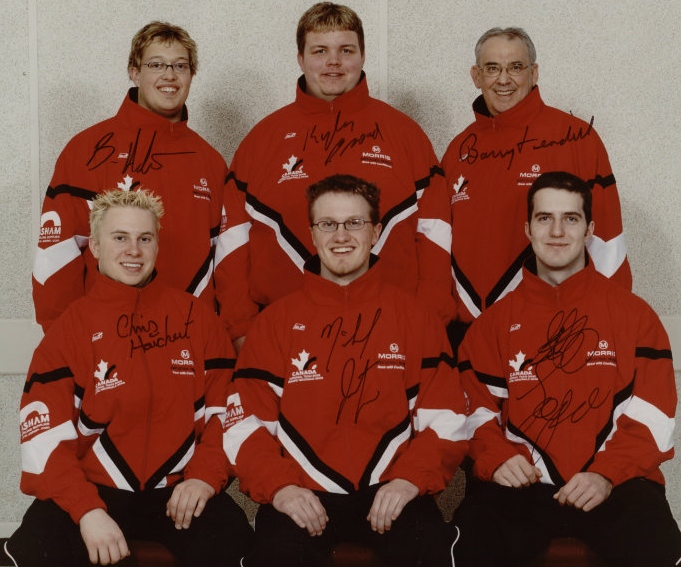 When the Steve Laycock junior men’s curling team from Saskatoon captured the 2003 World Junior Men’s Curling Championship, they accomplished what no other Saskatchewan junior team had done before. Laycock, together with third Chris Haichert, second Mike Jantzen, lead Kyler Broad and alternate Ben Hebert and under the coaching guidance of Barry Fiendell, brought home gold from 2003 Star Choice Junior Men’s World Championships in Films, Switzerland in an exciting extra-end victory.

The road to the world junior title began when the Laycock team captured the Target Provincial Junior Men’s playdowns at the Outlook Curling Club. The play of Laycock earned him the Ernie Richardson All-Star skip award while Kyler Broad received the Wes Richardson All-Star lead award.

The foursome, accompanied by alternate Ben Hebert and coach Barry Fiendell, then went on to the 2003 Karcher Junior Men’s Canadian Championship in Ottawa. The team played extremely well, finishing the round robin play with an 11 – 1 record, good enough for first place overall. In the championship finals, the Laycock team defeated the team from Alberta by a score of 9-5 to capture the Canadian Junior Men’s title. Laycock once again was named to the First All-Star team along with third Chris Haichert and second Mike Jantzen.

In Films, Switzerland, host of the 2003 Star Choice Junior Men’s World Championships, Laycock and his team finished the round robin at 7-2. That record was good enough to earn a 4-way tie for first place overall together with Sweden, Norway and Switzerland. In the semi-finals, the Laycock team defeated Norway by a score of 5-4.

Laycock then moved on to play Sweden in the finals. In a tightly fought contest, Laycock stole singles in both the 8th and 9th end to hold a one point lead heading home. Sweden tied the game with the last rock in the 10th forcing an extra end. With his last rock, Laycock hit an unguarded Sweden stone in the top of the twelve foot for the win and the gold medal. The play of third Chris Haichert and lead Kyler Broad was recognized by their placement on the First All-Star team.

The victory by Laycock team also marked another first. In the woman’s world final also held in Films, Switzerland, Saskatchewan’s Marliese Miller captured the women’s gold, marking the first time that teams from the same country and same province won the world juniors in the same year.