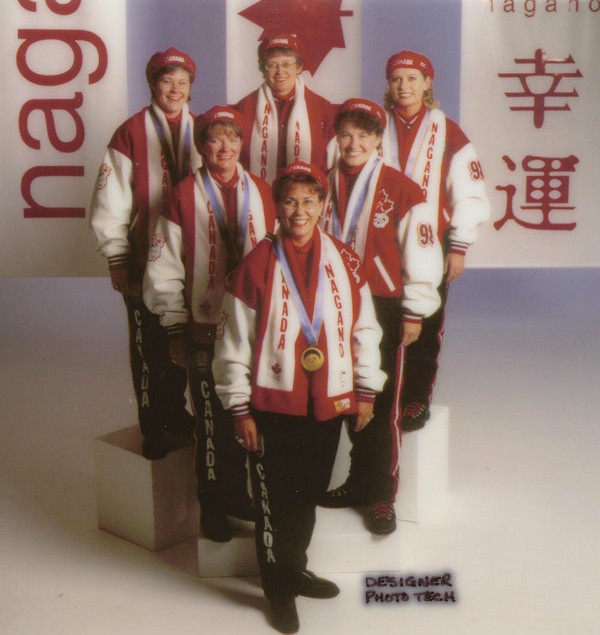 With three World Championships under their belt the Sandra Schmirler rink was an obvious contender for the Olympic gold in 1998. Making history, the Schmirler team consisting of Marcia Gudereit (lead), Joan McCusker (second), Jan Betker (third), Sandra Schmirler (skip), Anita Ford (coach) and Atina Ford (fifth), were the Canadian representatives in the debut of curling as a medal sport in the Nagano Olympics.

After taking their third World Championship in Denmark the Schmirler team set their sights on the Canadian Olympic trials held in Brandon, Manitoba. The Schmirler team finished Olympic trials with a record of 7-2, placing them first in the round robin and giving them a bye into the final against Shannon Kleibrink’s Calgary rink. A seventh-end wick from Schmirler locked them into a 9-6 victory over Kleibrink, and the team was headed to Nagano to represent Canada at Olympics.

With eight countries qualifying for the Olympic curling event, each team would only play each other once. The pressure of the international stage did not faze the Schmirler team as they clinched first place at the end of the round robin 6-1. Their only defeat came from Dordi Nordby’s Norway team in a slim margin 6-5.

The sudden death semifinal brought first place Canada and fourth place Great Britain to play for a berth into the Olympic final. It all came down to the eleventh end but with the hammer the Schmirler team was able to win 6-5 ensuring them a medal.

The final matchup for Olympic gold was against Denmark’s Helena Blach-Lavrsen. In the ninth end McCusker made a triple-kill allowing Jan to peel on her two shots which allowed a wide open hit from Schmirler to seal the win 7-5. The Schmirler rink would make history as the first ever women’s curling team to win an Olympic gold medal. The team’s average shot percentage was 84% with Marcia Gudereit shooting for a 95%, McCusker for an 89%, Betker for a 73%, and Schmirler for a 72%.

Sandra Schmirler’s untimely death in 2000 ended their dreams of winning a consecutive gold medal at the 2002 Salt Lake City Olympics. Schmirler was inducted posthumously in the Canadian Sports Hall of Fame and the World Curling Federation Hall of Fame.

Installed in the Saskatchewan Sports Hall of Fame in 2001.