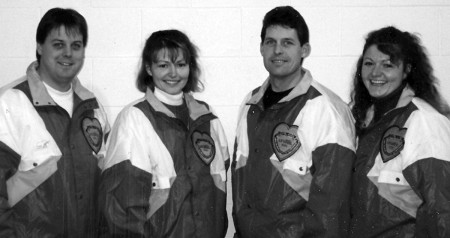 Saskatchewan is known for producing great curlers. The 1996 Randy Bryden rink was no exception.  This group was a perfect example of the determination and work ethic needed for success on the pebbled ice.

For the Bryden Rink, the road to the Unitel Mixed Canadian Champions started with winning the single spot out of Regina to represent Zone 7 in the high level competition at the Saskatchewan provincial finals. This foursome was unique with brothers, Russ and Randy Bryden playing alongside sisters, Cathy (Inglis) Trowell and Karen Inglis.

Bryden skipped his rink to a fourth place finish in the Provincial Imperial Oil Mixed Competition eight team round robin. The Bryden foursome went on to win their two playoff games and claim the Saskatchewan mixed curling championship.

At the Unitel Mixed Canadian Championship in Charlottetown, Bryden and his rink sailed to a first place finish in the round robin with a 9-2 record. In the Page playoff, Saskatchewan met second place Ontario.  Team Ontario stole a tenth end deuce to send them into the final.

Bryden and his team regrouped in the semi-final and defeated B.C. 6-4 by stealing a point in both the ninth and tenth end. The victory set up a rematch with Team Ontario for the Canadian Mixed Championship bragging rights.

The championship match was a classic with the lead changing hands several times. Ontario grabbed two in the tenth end to send the game into an extra end. With the hammer, Bryden scored two and Saskatchewan curling history was made.

With the 8-6 victory over a tough Ontario team, this talented group of curlers won Saskatchewan’s fifth mixed title since the championship was created in 1964. The win, which was Randy Bryden’s first national championship, ended Saskatchewan’s 12-year drought at the Canadian Mixed Championships.

In addition to winning the championship, the Bryden brothers also made the Unitel all-star team.