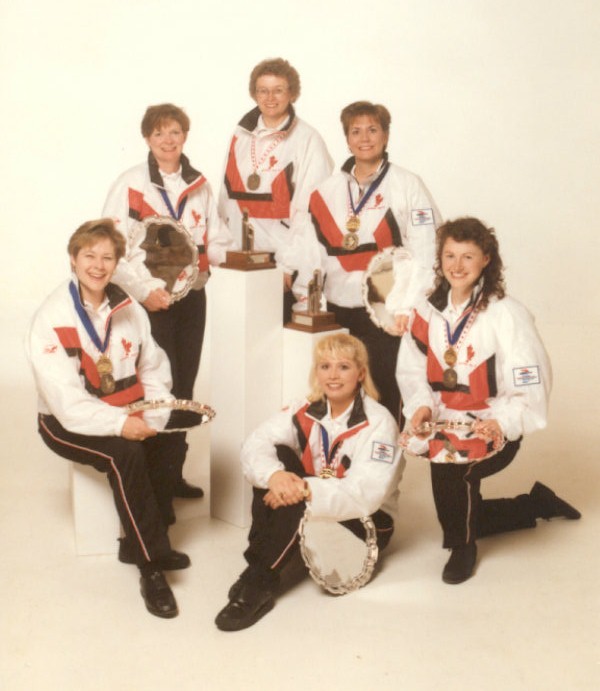 The Sandra Schmirler team of skip Sandra Schmirler, third Jan Betker, second Joan McCusker, and lead Marcia Gudereit came together in 1990, and by the following year had won its first Saskatchewan Ladies’ Curling Championship. The team won its second provincial championship in 1993, curling out of Regina’s Callie Club, and added Anita Ford as their fifth curler for the Canadian Championships that year. At those championships, the Schmirler team finished round robin play with a 9-2 record, and received a bye into the final. Schmirler’s Saskatchewan team scored a 7-6 extra end victory over Manitoba and claimed its first Canadian championship. At the 1993 World Curling Championships in Geneva, Switzerland, the team completed its dream season with a 5-3 win over Germany in the final, to win the Women’s World Curling Championship, the first Saskatchewan team to accomplish this since Marj Mitchell won it all in 1980.

The following season, as Team Canada, Schmirler, Betket, McCusker, Gudereit, and Ford automatically qualified for the Canadian Championships. At those championships, they finished round robin play with a 10-1 record, and captured their second straight Canadian Championship with a 5-3 victory over Manitoba’s Connie Laliberte. They defended their world championship in Oberstdorf, Germany in April 1994, finishing the round robin in their familiar first place. For the second time in as many years, the Schmirler team emerged victorious, with a 5-3 win over Christine Cannon of Scotland. The Sandra Schmirler team was later named Sask Sport’s Team of the Year for 1993 and 1994. In 1997, Anita Ford became the team’s coach and Atina Ford was recruited to fill the fifth position. After winning the provincial Championship in January, the team headed to Vancouver for the Canadian Championships. After a 2-2 start at the tournament, the team won its next eight straight games, and faced former Canadian champion Alison Goring in the final. The Schmirler team won that final game and with it, their third Canadian championship. At the 1997 World Championships in Bern, Switzerland, the Schmirler team once again finished first in the round robin, and after winning their semifinal match, played Norway’s Dordi Nordby in the final. After the last rock had been thrown, the Schmirler team members were again crowned World Champions, the only women’s curling team in history to earn the title three times.

Installed in the Saskatchewan Sports Hall of Fame and Museum on June 14, 1997.