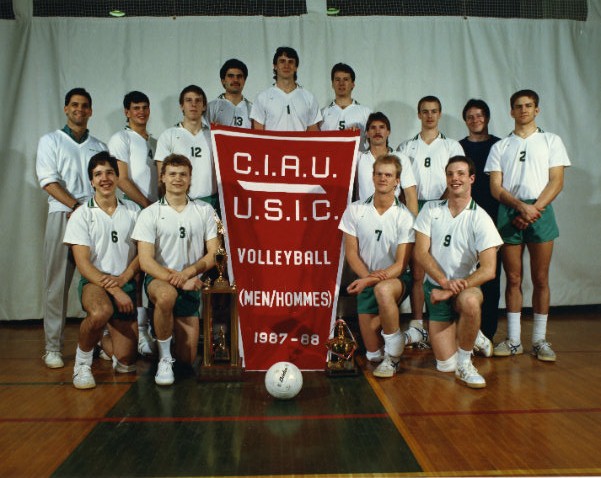 After bitter second and third place finishes at the Canadian university championships in the previous three seasons, the 1988 University of Saskatchewan Huskies Men’s Volleyball team was more than motivated to finally become national university volleyball champions. They got their chance at the trophy during the Canadian Interuniversity Athletic Union (CIAU) championship finals in 1988.

With a small and extremely determined team of athletes, the Huskies finished first in the Canada West Conference with a 14-1 record, losing just four sets all season and going undefeated after Christmas. With some of the top attack and blocking leaders in the league, the team went straight to the Canada West final against the strong and focused University of Calgary Dinos. The first match proved an easy victory, winning 3-0 and match two soon followed with a 3-1 triumph, easily defeating the Dinos in a best-of-three series to be crowned Canada West champions. Brian Bavlas and Jerome Linnell were named to the First Team and Brock Blomquist, Darwin Daae and Brad Dusyk to the Second Team 1988 Canada West All-Stars. Coach Tom Graham was named 1988 Canada West Coach of the Year.

In March, the Huskies were off to Guelph, Ontario to compete for the CIAU national championship. They defeated the University of Toronto Varsity Blues 3-1 in the quarterfinal and the Dalhousie University Tigers 3-0 in the semifinal.

The Huskies got off to a rocky start in the national final against Manitoba, losing the first game 15-5. They rebounded to dominate the next three games 15-8, 15-2 and 15-9, defeating the number one ranked University of Manitoba Bisons 3-1 in the final to be crowned the 1988 CIAU Men’s Volleyball Champions. CIAU First Team All-Star Brian Gavlas was voted Most Valuable Player of the championship and Jerome Linnell was a CIAU Second Team All-Star. Brad Dusyk and Darwin Daae were named Championship All-Stars for their seventeen kills and seven blocks respectively.

Installed in the Saskatchewan Sports Hall of Fame and Museum on June 19, 2010.