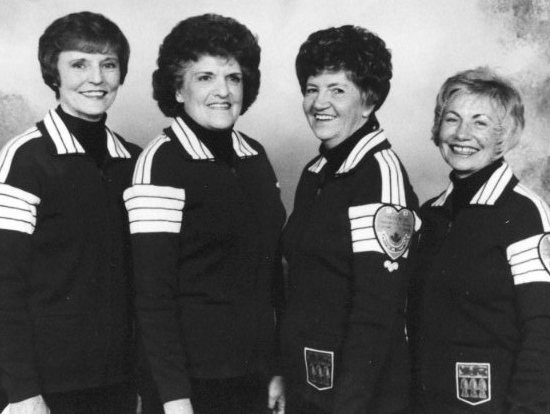 The Krahn Rink dominated the Saskatchewan scene for six years, 1982 – 1987 inclusively, winning 67 and losing only 5 games at the regional, southern and provincial levels.During their six years of competition the foursome set records in senior ladies curling by winning six provincial and three consecutive Canadian titles. They were also runners-up in three national championships.

The team established an enviable record of 52 wins and 9 losses in national competition. At the national finals in Yorkton in 1985 they were undefeated. In recognition of their outstanding achievements all four members were named to several Canadian seniors All-Star teams.

This team rates highly as ambassadors in sport, not only for their excellent curling, but for their good sportsmanship and the gracious manner in which they conduct themselves both on and off the ice. The Hall of Fame proudly recognizes this renowned curling team, Evelyn; Twyla; Shirley and June, and we in Saskatchewan thank you.

Installed in the Saskatchewan Sports Hall of Fame June 18th, 1988.