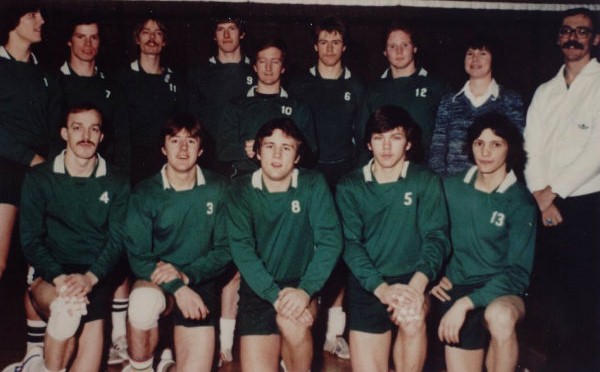 In March of 1979, the University of Saskatchewan Huskies Volleyball team made history by capturing its first ever Canadian Interuniversity Athletic Union (CIAU) Championship. The Huskies had previously won the Canada West University Athletic Association conference title in order to advance to the national tournament in Hamilton.

The script for the CIAU Championship tournament was perfectly written as the number two ranked Huskies met the number one ranked University of Manitoba Bisons in the final. The teams traded victories in the first four games, setting the stage for a “winner take all” fifth game. Manitoba quickly grabbed a 9-3 lead in the final game, but the U of S Huskies refused to admit defeat. With Manitoba ahead 14-9, the Huskies scored seven consecutive points for an amazing come from behind victory to win the set and the national title.

The Huskies achievement in 1979 was matched by the 1978-79 University of Saskatchewan Huskiette Volleyball team who also won the CIAU national Championship. Not only was it the first national championship for both teams, but it marked the first time in the history of any Canadian intercollegiate sport that the same university won both the Men’s and Women’s titles in the same year.

Several individuals from the 1978-79 team were recognized for their prowess and skill. Murray Hill was named CIAU Coach of the year. Five of the six starters from the team were named to the Canada West Conference All-Star squads; Gudmondson, Gamborg and Saxton to the first team and Harris and Sawatzky to the second team. Brian Gamborg and Don Daxton both went on to play for the Canadian National Team.

Installed in the Saskatchewan Sports Hall of fame and Museum on June 18, 1994.