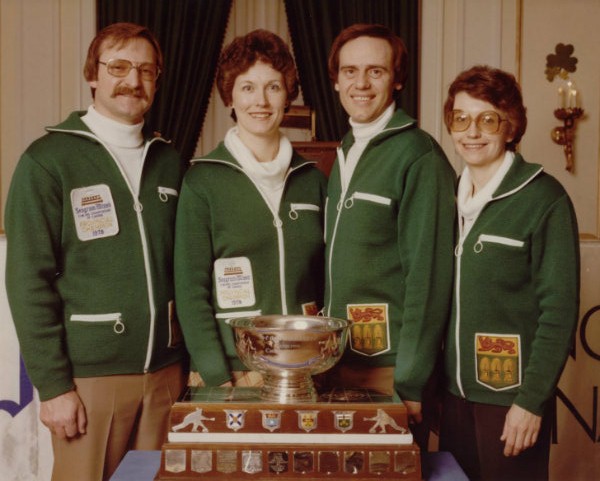 The Nutana Curling Club in Saskatoon was home for the rink of Bernie Yuzdepski (skip), Marnie McNiven (third), Roy Uchman (second), and Joan Bjerke (lead). The team was put together just before club play downs without having curled a single game together except in the case of Bernie and Roy, who had curled together in the men’s competition.

They won eight straight games in the city play downs and earned a berth into the provincial championships in North Battleford, Saskatchewan. Included in these games, to become the city representative in the provincial play downs, were victories over Rick Folk’s rink in the semi-final and Byron Harvie in the final. The team defeated Regina’s Sam Richardson rink in a hard fought provincial final and became the Saskatchewan representative for the Canadian Mixed Curling Championships.

The 1978 Canadian Mixed Curling Championship was held in Saskatoon at their home club. This proved to be a real advantage as they had the crowd in their corner throughout the championships. The team continued their undefeated record by winning their 21st straight game, defeating Quebec to capture the Canadian championship. In the 22nd game against New Brunswick, they defeated Richard Bulyea to extend their incredible winning record.

This was the last year of the round robin format at the National Championship and with the title already decided the Yuzdepski team played their 23rd game against Bob Giles from the North West Territories that had no impact on the final results. This was their only loss in an otherwise incredible run that resulted in them being crowned the 1978 Canadian Mixed Curling Champions.