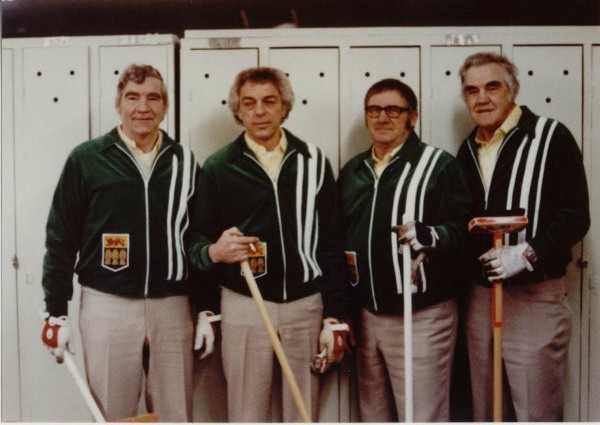 In February, 1978, the Art Knutson Rink of Elbow, SK became Canada’s Senior Curling Champions. Sponsored for Canadian curlers fifty years of age and over, the annual national seniors tournament is an eleven rink playoff with teams from all provinces and one combined from the territories. The Knutson Rink captured the title by soundly defeating the Al Dusseault Rink of the Yukon-Northwest Territories 12-4 in eight ends. Curling brothers Art, Elmer and Gerhard “Gay” Knutson, along with Ernie “Twink” Vaughan, completed the round-robin tournament with a superior 10-1 record, finishing ahead of the 9-2 record held by the Art Ballem Rink of Prince Edward Island.

The Knutson Rink earned the 1978 national appearance by capturing the seniors title during the Provincial Seniors Championship held at the Estevan Curling Club. To win the “A” side competition, Knutson ended the tournament with a perfect record, defeating Hjertass of Prince Albert, Strumm of Saskatoon and Keys of Milestone. During a Sunday morning final, Knutson edged out “B” side winner Bruce Schell of Saskatoon by a 4-2 margin to take the provincial title.

The Elbow rink traditionally experienced success in senior’s competition, appearing at five other Canadian Senior Men’s Championships after winning the Saskatchewan provincial title. The rink’s nucleus first curled at the 1976 senior national championship held in Ottawa. The three brothers played with Herman Duck as lead. In 1979, the Knutson Rink placed second in the Canadian Senior Men’s Championships in Noranda, Quebec. This time, only Gerhard was missing from the 1978 winning lineup. The 1978 rink reassembled at Nanaimo, British Columbia in 1981 and Sarnia, Ontario in 1983 to place second each time. The team’s final national seniors appearance came in 1984 at St. John’s, Newfoundland with a third place finish.

One of Art, Gay and Elmer Knutson’s initial curling successes came in 1967 when they became Saskatchewan’s Men’s Curling Champions on the D.J. Wankel Rink. The team went on to compete at the McDonald Brier that year.

Installed in the Saskatchewan Sports Hall of Fame June, 1993.