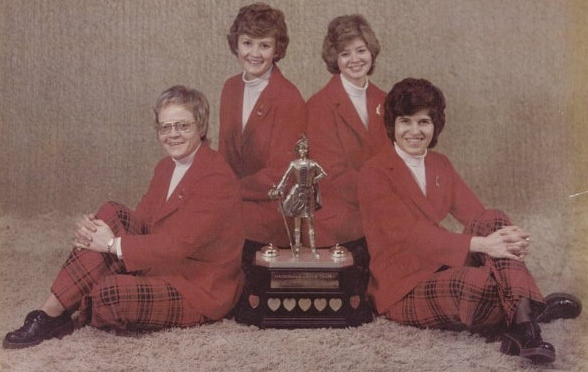 The Farnham curling team from the Saskatoon Nutana Curling Club was composted of: Skip, Emily Farnham; Third, Linda (Saunders) Wagner; Second, Pat McBeath; and Lead, Donna Collins. Farnham and Collins had played together for seven years while Wagner and McBeath came on board in 1973.

After winning the Northern Saskatchewan playdowns they went on to win the right to represent Saskatchewan in the Canadian championships. Victoria was hosting the national championship and the team was greeted warmly by a crowd that seemed to be made up of mostly retirees from Saskatchewan. Soon, the team was treated as the overwhelming fan favourites.

The Farnham rink saved some of their best curling for the national championships. They had nine straight victories without a loss, including final day victories over British Columbia and Ontario.

The team credits a program of extra practice sessions with pre-game conditioning and warm-ups as reasons for some of their success. As well, the team worked on their team-building skills of being supportive and non-judgmental. These, along with confidence and friendship that they had with each other, led to success on the ice.