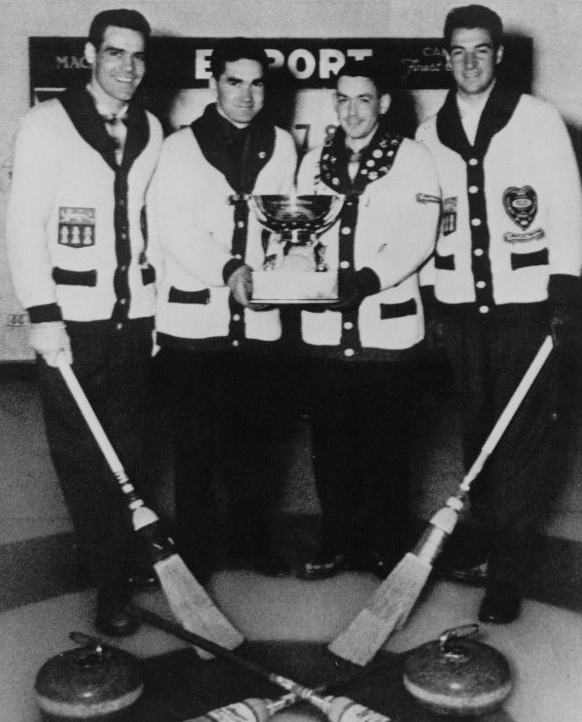 The team first entered the national scene in 1959 and after going 10-1 in the round robin tournament, they became the youngest team to ever win the Canadian Brier championship. The team advanced on to the first ever World Curling Challenge held in Scotland. Despite being rookies to the international stage the team from Stoughton went undefeated in the five game series against Scotland’s Willie Young to capture the first Men’s World championship in 1959.

In 1960 the Richardson team was eager to defend their title and after dominating the round robin with a 9-1 record they earned their second consecutive Canadian championship. The Richardson team once again headed to Scotland, this time to compete against Hugh Nielson’s Scotland rink. Repeating history, the Stoughton rink went undefeated in the five game World Championship Series claiming their second international title.

A devastating loss to Bill Clarke’s rink during the Regina play downs left the Richardson’s unable to defend their Saskatchewan, Canadian and World titles in 1961. The following year the Richardson rink came back with vengeance, winning the Saskatchewan title and finishing with a 8-2 record in the Canadian championship round robin. With a national title on the line, the Richardson team defeated the defending champions, Hec Gervais’ Alberta rink 14-7. Advancing on to international competition the Richardson rink had a flawless performance, going 6-0 in the round robin to claim their third world championship.

The Richardson rink was the first team in Canadian curling history to have won four Canadian Championships. The team ended their careers with an outstanding international record of 21 wins and one loss, along with four world championships.

Individually, Ernie Richardson was inducted into the Saskatchewan Sports Hall of Fame in 1971 to honor his remarkable curling career.

Installed in the Saskatchewan Sports Hall of Fame in 1973.