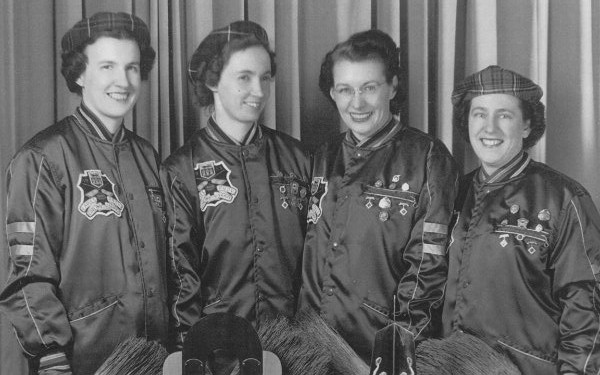 The foursome from the Regina Callie Club composed of Joyce Miller as lead, Jean Graham at second, Phyllis Day at third and skip, Janet Perkin were the Regina representatives in provincial competition in 1953. They easily won the “A” side of the Southern Ladies play downs with a five victory sweep which was followed by 10-5 and 11-2 wins over the “B” side winners, the Iona Russell rink.

The Perkin rink was victorious in the provincial championships in North Battleford when they defeated the northern representatives, the Anderson rink from Nipawin. The Western Canadian championships were held in March in Regina and this marked the first time that there was an opportunity to compete beyond Saskatchewan for ladies’ curling in Canada. Competitors from Alberta, Saskatchewan and Manitoba were involved in this competition while British Columbia would join the following year. It would be 1960 before there would be a truly national competition for the ladies similar to that of the Brier for men.

The Saskatchewan foursome finished the three team double round robin play with a record of 3 and 1, posting one loss and one victory over Alberta’s Doris Close rink and two wins over the Gladys Dick foursome from Manitoba. The Manitoba team managed to split their games with Alberta thereby avoiding the necessity of a playoff between Perkin and Close. The victory was especially sweet for the Saskatchewan foursome, as they suffered a 22-4 defeat by Alberta in the first game of the round robin. The Western Canadian Championships were the first time that the Perkin rink had played on artificial ice and it took a while to get used to the surface, but once they did, they proved to be unbeatable.