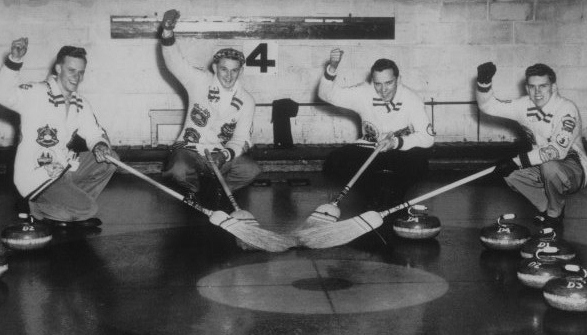 Between 1950 and 1952 the Gary Thode Saskatoon Technical Collegiate curling team dominated the High School Boys’ curling scene, first in Saskatoon, and then across the nation. After being successful in 1951, the Gary Thode rink only lost one member, Orest Hryniuk who was replaced with Doug Conn.

En route to the Canadian championships, the team was undefeated in the Northern and provincial finals, defeating Moose Jaw’s Dick Clarke to win their second straight provincial championship. The string of wins continued at the Canadian championships in Moncton, as the Thode rink was nine straight games to claim the sought after second consecutive Canadian Junior Men’s Championship. In the process they scored an 8-ender at the expense of the Quebec team, the only time this had happened in a national competition. In total the team had 21 consecutive wins from local to national level.

The 1952 Thode rink was inducted into the Saskatoon Sports Hall of Fame in 1989.

Installed in the Saskatchewan Sports Hall of Fame on June 15, 1996