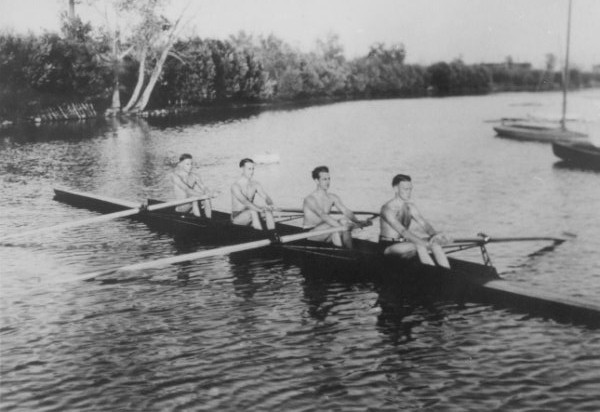 The Regina Rowing Club got off to a rough start in 1938 due to a drought, which left Wascana Lake dry and bare. Instead of practicing on water, the dedicated oarsmen trained on the rowing machines. Eventually Wascana Lake gained 5 feet of water to row on, which helped them gain synchronicity and rhythm as a cohesive unit.

Another major problem the rowing club was faced with was lack of funds. The goal for the Regina four was to compete in the Henley regatta to qualify for the Olympics, however going to St. Catharines, Ontario was quite an expensive trek. After substantial fundraising efforts the team was able to arrive in Ontario but were frugal with the money, spending little on food and hotels in order to be able to compete for the Canadian title.

Highly underrated and not even listed in the Henley program as a contesting club, the Regina junior 150-pound four cruised over the finish line to win the Canadian Junior Fours Championship. The Canadian rowing community was shocked because not only had the Regina crew won, but eight lengths of open water separated them from their nearest competitor, Buffalo’s West Side Rowing Club.

The Regina Rowing Club did not celebrate for long; their next race would be in the senior division against much stiffer competition, the 1936 Olympic silver medalists and the Henley champions from the previous year. Despite their dominating performance on the junior stage the Regina four were still not seen as a contenders due to their heavy, inefficient and outdated boat that many other Canadian clubs would have discarded. Once again they proved people wrong, the Regina oarsmen crossed the finish line two boats ahead of the second place Toronto Argonauts becoming the Canadian Four Championship Crew.

Finally the Regina crew got the recognition they deserved and were seen as legitimate contenders to represent Canada at the 1940 Olympics. However, due to World War II being declared in 1939, the Olympics were cancelled and the crew never competed.

The humble Regina four were quick to attribute their win to the Regina Rowing Club and Saskatchewan because without the help of the community they could not have attended the Henley regatta.