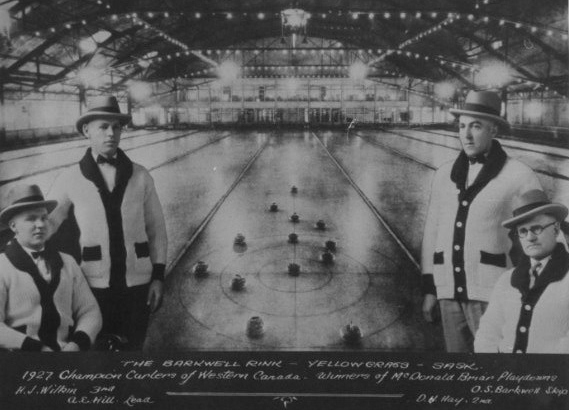 This Yellow Grass foursome represented not only Saskatchewan, but all provinces West of Ontario at the first MacDonald’s brier held in Toronto in 1927.

Instead of having direct representatives and playdowns as is done now, the MacDonald Company ran provincial playdowns on a challenge basis. The Barkwell foursome was the only rink in the province to challenge, and thus won the provincial title by acclamation.

The next step was to meet in Winnipeg for a competition against Manitoba and Alberta representatives. At their own expense, skip Ozzie Barkwell, third H.J. ‘Pete’ Wilken, second D.H. ‘Hec’ Hay and lead Alfred Hill loaded their 44-pound rocks onto the train and headed for Winnipeg and the first and only Western Canada championship. A best-of-three series was played against the Jim Congalton rink, Manitoba’s representative as the Alberta rink never did show up. Only two games were necessary for the Saskatchewan rink to win, and become the first and only Western Canada champion to play in a Brier.

Their record in the 1927 Brier Championship was three wins and four losses, good enough for a three-way tie for third spot in the eight team event. The foursome left their mark on the national event before returning home. Asked what they thought on the event, they replied that the games should be 12 ends, rather than the 14-end games then in vogue. The change was made the following year and remains to this day.

Installed in the Saskatchewan Sports Hall of Fame, June 1976.