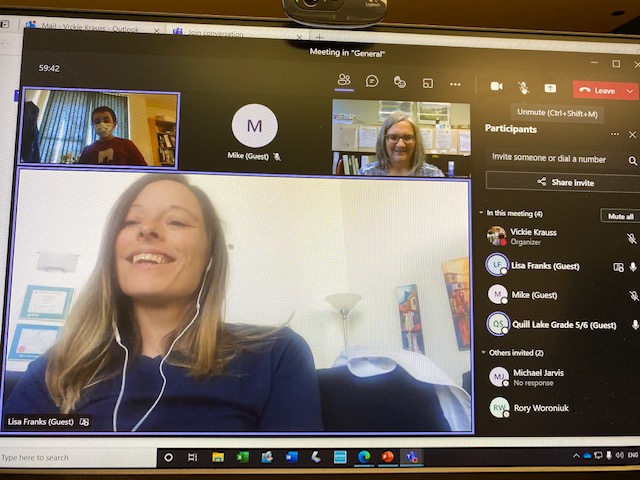 The Saskatchewan Sports Hall of Fame (SSHF) has been delighted by the response to this year’s virtual offering of our Never Give Up program. The program is running from May 18 to June 24 and all of its available spots filled up in less than two days.

With the program being offered virtually students from schools in smaller centres have been able to take part in Never Give Up for the first time.

Lisa Franks during a Never Give Up virtual event in May of 2021.

Never Give Up was made available to Grades 4-8 in schools throughout the province of Saskatchewan thanks to the support of presenting sponsor SaskTel. This year’s program will focus on various subject areas in the Grades 4-8 Saskatchewan Curriculum dealing with identity and showcase how sport contributes to the identity of self and others. It will also highlight our feature inductees and Saskatchewan athletes who have overcome significant obstacles in their lives.

This year, we welcome back inductee Ted Jaleta and his inspiring story. Jaleta’s promising distance running career was put on hold in his native Ethiopia after he was shot, imprisoned and tortured during the Ethiopian Civil War in 1976. Jaleta was able to escape and flee the country, eventually settling in Canada.

Also added to the team are Lisa Franks and Colette Bourgonje. After a medical condition left her paralyzed, Lisa Franks didn’t turn away from the world upset about her fate. Instead, she turned to wheelchair sports and became a Paralympian. After being injured in a car accident in high school, Colette Bourgonje has trained her way to become one of the few Canadians to participate in both a winter and summer Paralympic Games.

Jaleta was inducted into the SSHF in 2005, Franks was inducted in 2018 and Bourgonje has been recently announced as a member of the forthcoming 2021 SSHF Induction Class.