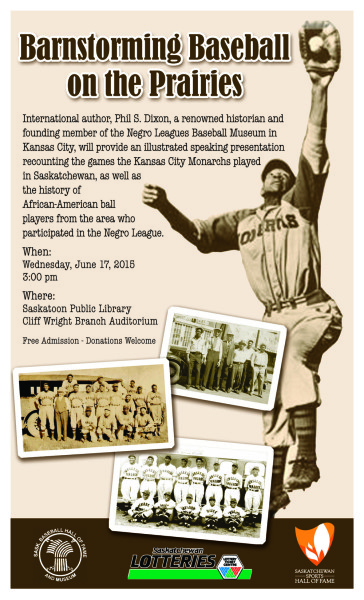 The Saskatchewan Baseball Hall of Fame and the Saskatchewan Sports Hall of Fame are pleased to welcome to the province renowned historian, author and founding member of the Negro Leagues Baseball Museum in Kansas City, Mr. Phil S. Dixon. Mr. Dixon will be delivering presentations in both Saskatoon and Regina recounting a significant time in baseball history – that of the barnstorming tours of the Negro Baseball League into Western Canada in the 1930s & 1940s. As part of a 90 city North American tour, Mr. Dixon follows the touring path of the Kansas City Monarchs and their legendary players including Jackie Robinson, Leroy Satchel Paige, Ernie Banks, and Wilbur “Bullet” Rogan.

Mr. Dixon states, “Most people have heard of Jackie Robinson, some have heard of Satchel Paige, many have heard of the Kansas City Monarchs but few know how connected they were to your local community. In honor of the 90th Anniversary of the Monarchs’ first World’s Championship in 1924, I am returning to 90 cities where they played games to present this team’s unique history, and I do so with a local twist.” Delivering an illustrated presentation with historic photographs, entertaining stories and colourful baseball poetry, Mr. Dixon talks about games played in our province against local competition as well as the history of African-American ball players from our communities who participated in the Negro Leagues.

Many people are unaware of how their communities played an integral role in the success of Negro League Baseball and overall goodwill throughout North America at a time when it was exceedingly difficult and impossible in some areas for Black people to travel. However, the teams from the Negro League traveled and were welcomed to towns and cities to play baseball. Now that history can reach places and people who may not ever get to the Negro League Baseball Museum in Kansas City. 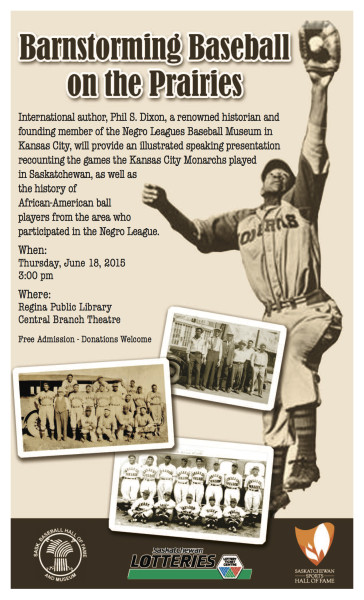 Presentations will be held on:

Admission is free but donations to the Halls of Fame would be appreciated.