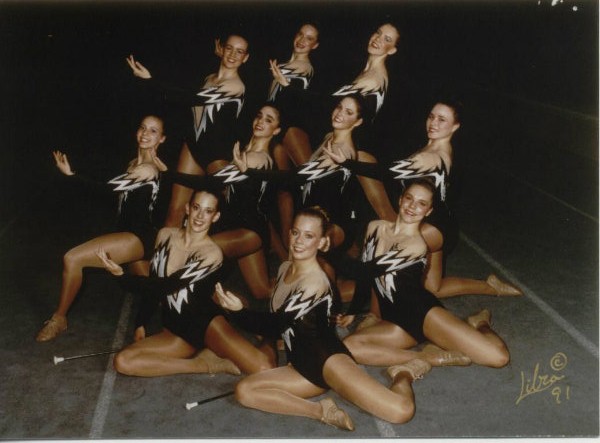 The Buffalo Gals Baton Twirling Club was formed in 1967, Canada’s Centennial Year, and twenty-four years later the club reached the pinnacle of success – a World Championship!

The Buffalo Gals, named in honour of Regina’s Buffalo Days Celebration, began to experience success within two years of their formation. In 1969 they travelled to the Canadian National Exhibition in Toronto and won first place in the Corps Championships. During the 1970’s the newly named Sundown Optimist Buffalo Gals performed and competed at international venues, and in 1978 won Canadian Championships in all three events (Corps, Team and Dance Twirl) in the Juvenile, Junior and Senior age divisions.

In 1974 and again in 1976 the Buffalo Gals captured the coveted “Little Brown Jug” at the prestigious America’s Youth on Parade, held annually at the University of Notre Dame – South Bend Indiana. The Buffalo Gals were the first Canadian group to win these Corps Championships, which were at the time the highest level of international competition in baton twirling.

During the 1980’s the Buffalo Gals continued their success at the national level, and moved on to the international scene. At their first World Championship in Paris, France in 1987, the baton twirling team placed 5th and were consistently on the international medal podium for the next four years, with World Silver in 1988, Nagoya, Japan; World Bronze in 1989, Lausanne, Switzerland, and World Silver in 1990, San Antonio, Texas.

In 1991, the Sundown Optimist Buffalo Gals travelled to Podova, Italy to represent Canada at the World Championship for the fifth straight year. Canada had never won a world championship in team competition, and expectations were high for this Regina team. The team had been formed in 1987 with its sights set on a future World Championship, and used a formula of outstanding coaching and strong individual competitors working as a team to become Canada’s first World Championship team gold medalists.

The Sundown Optimist Buffalo Gals organization credits head coach Maureen Johnson with the tremendous success of the club. Maureen is the clubs’ coach and choreographer, and is also a nationally certified dance examiner, and an internationally certified judge. Maureen was the recipient of the Saskatchewan Sports Federation Volunteer of the Year award in 1992 and 1993.

Installed into the Saskatchewan Sports Hall of Fame and Museum on June 15, 1996.