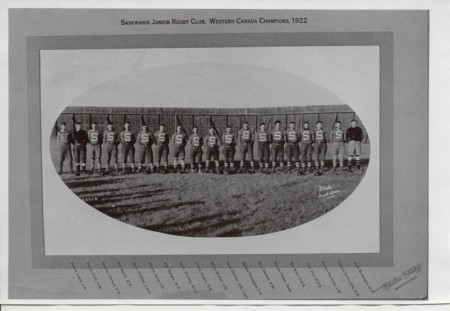 Saskwanis, as they called themselves, was made up of rugby players from Saskatoon teams, the University of Saskatchewan and the Saskatoon Hilltop squads.  During the first year of a two-year existence, Saskwanis built an impressive record, one good enough to reach the Western Canadian final.

In the title game, played at Cairns Field in Saskatoon, Saskwanis defeated the Calgary Y.M.C.A. 17-18.

The following year they earned a berth in the Western final berth defeating the Calgary Canucks at Hillcrest Field in Calgary.  In the final game, Saskwanis faced St. Johns College of Winnipeg to determine the West’s top team.  Winnipeg was to win that game and end a brilliant two years of rugby by Saskwanis.