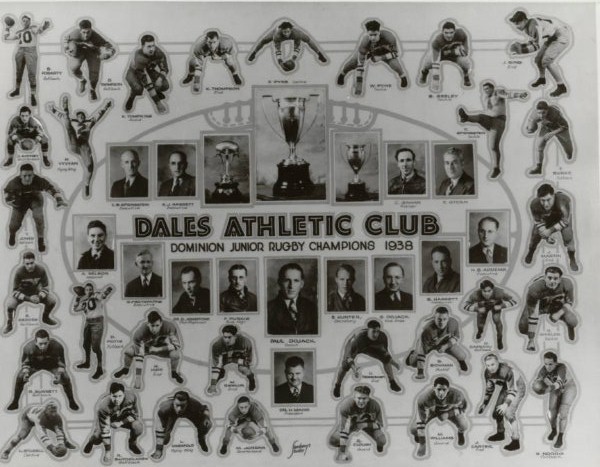 The Regina Dales started out in 1929 as a way for young people living in one of the city’s poorer areas to participate in a wide variety of sports. By 1933 they entered the junior ranks and were on their way to a history in competitive rugby.

By 1938 the Dales were considered one of the dominant rugby teams in Canada. They beat the Moose Jaw Millers 18-1 to win the Saskatchewan Junior Rugby title and then went on to capture the Western Junior Rugby final against the Winnipeg Y.M.H.A 3-1 to move on to the National final.

They played the Montreal Westmount’s in Montreal on December 3, 1938 to challenge for the national title. In what is referred to as the “ice bowl”, the Dales managed to win the National crown beating the Westmount’s by a tight 4-3 margin.

Money was hard to come by for the team and all they had was $50 to cover all hotel and meal expenses. After two days they still had $7 left so they had managed on $43 by were glad more money was wired so they could eat on the way home. They had been away from home for five days and all but 10 hours had been spent on the train.