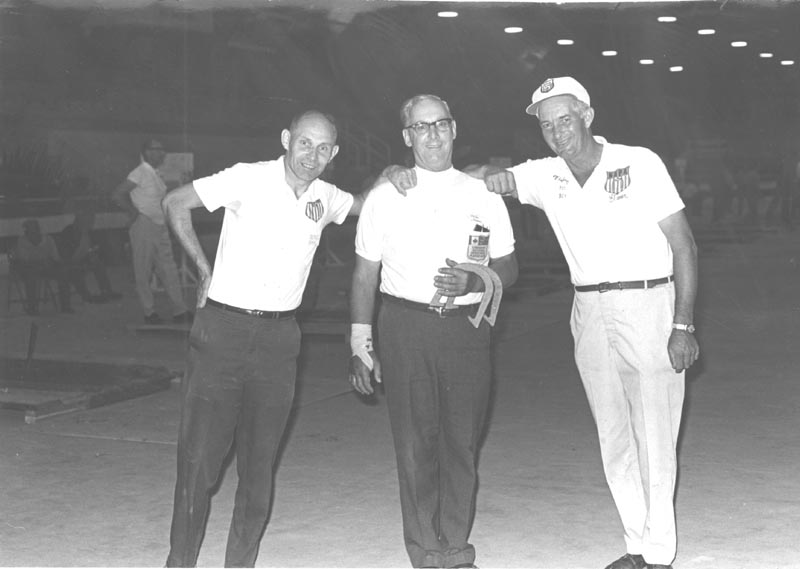 Jack Adams started horseshoe pitching in 1933 at the Saskatoon Horseshoe Pitching Club. He won his first major championship in 1938 and 50 years later, in 1988, won a bronze medal in the Canadian Senior Men’s horseshoe championship. Jack Adams was an international horseshoe pitcher at the height of his competitive career.

It is as an administrator, however, that Jack Adams has made the biggest impact. He was appointed a Canadian Armed Forces member of the executive council of the Canadian Horseshoe Pitchers Association in 1945 and remains on that executive today. By the 1970s he was involved in horseshoe pitching administration at the local, provincial, national and international levels. He is a certified level two coach and level three official and has been the president of the Saskatchewan Horse Association since 1991.

During the same period, Jack was the president of the Horseshoe Canada Association (1979-1985). During his tenure as president, Jack created a cohesive national organization which assured equal voting rights to all provincial associations. This feat had been attempted by the association’s various leaders from 1929-1979 but had never been successful.

In 1987 Jack Adams was an inaugural inductee into the Horseshoe Canada Association Hall of Fame. His citation reads, in part: “Perhaps the greatest feat performed by Jack Adams was his determination and ability to unite Eastern and Western Canada into one cohesive force… Jack Adams succeeded and in 1979 we began to have a truly National sport.” Having a strong national organization lead to Canada’s being chosen to host the 1997 World Championships in Kitchener, Ontario.

Internationally, Jack has been the regional director for Canada with the National Horseshoe Pitchers Association of America (NHPA) and the secretary for the Canadian chapter of the NHPA. In 1984 he was inducted into the NHPA Hall of Fame. In 1995 he was given the World Achievement Award for outstanding service to horseshoe pitching.

Installed in the Saskatchewan Sports Hall of Fame on June 19, 1999.