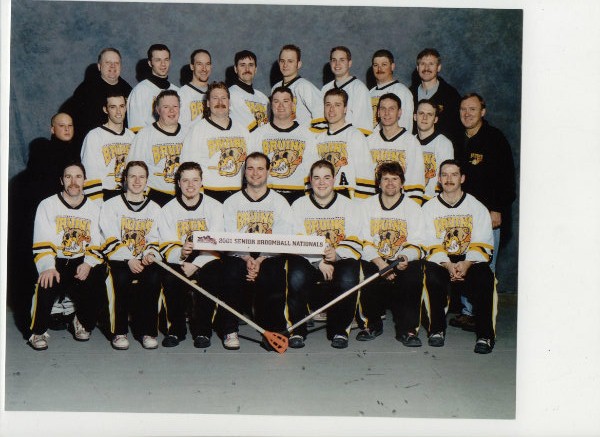 The Regina Silver Screen Bruins dominated the Regina league collecting 11 wins and just one tie in their 12-game schedule. Their dominance continued in tournament play with them having no losses while winning events in Odessa, Saskatoon and Calgary.

The 2001 nationals were played in Calgary and appeared to be a difficult path for the Saskatchewan squad as teams from Ontario and Quebec had won all the previous championships beginning with the first national championships in 1976. The Bruins posted a 3 – 2 record in the round robin with overtime wins against Calgary and Manitoba and a 4 – 0 triumph over the Canadian Armed Forces team. The Bruins lost to the North West Territories 1 – 0 and Ontario 5 – 2. This record was good enough to get them to their first goal, the A side semi-final.

The Saskatchewan representatives met one of the other favorites, Quebec in the semi-final and were victorious with a convincing 4-1 victory. This led them to the Canadian final where they had a rematch with Ontario who defeated them in the round robin. The Bruins dispatched them with a hard-fought, close contest 3-2 to capture Saskatchewan’s first-ever Canadian Broomball Championship. This was the first time in 25 years a province other than Quebec or Ontario had won the crown.

The coaching staff was led by Jeff Nostadt with Ray Bender as the assistant coach and Allan Duff acting as the team manager.